A Message from Thomas Lauderdale
Posted by Pink Martini on May 28, 2014

During this tour I have been reading a most incredible book just published by Steve McQuiddy called Here on the Edge: How a Small Group of World War II Conscientious Objectors Took Art and Peace from the Margins to the Mainstream.

I grew up in Indiana, where my father Kerby Lauderdale was a Church of the Brethren minister.  The first songs I ever played on the piano were hymns.  The Church of the Brethren is one of three peace denominations — the Quakers and the Mennonites are the other two — and during World War II, those who refused to go to war were sent to Civilian Public Service camps all around the United States, building roads, planting trees, fighting forest fires.  These camps were run by these three peace churches.

Incredibly, the Church of the Brethren operated Camp #56 in Waldport, Oregon — 5 hours south of Portland, Oregon, where Pink Martini is based.  Camp #56 became a Fine Arts Camp, publishing books of poetry and journals, presenting plays and musical performances, and making visual art in multiple mediums.  Morris Graves painted there.  Works by Henry Miller and William Everson and William Stafford were published there.

After the war, many of the conscientious objectors went south to become part of the San Francisco Poetry Renaissance, which heavily influenced Jack Kerouac and Allen Ginsberg and the Beat Generation, and which led eventually to the Summer of Love in San Francisco.

I first learned about the Waldport Fine Arts Camp in 1987, when I catalogued the library of Oregon literary giant and historian Brian Booth.  As a high school junior, I was amazed and inspired by the beautiful publications of the United Press of Waldport, Oregon.  Years later, I am proud that my father’s church provided (inadvertently, perhaps) a forum for the intersection of peace and art.

This is a great book, and I hope you will consider reading it! You can pick up your copy here.

Love from the road,

Purchase your copy of Here on the Edge here.

See some of the photos from Camp #56 below. All images courtesy of Brethren Historical Library and Archives | Digital Image Copyright 2011. 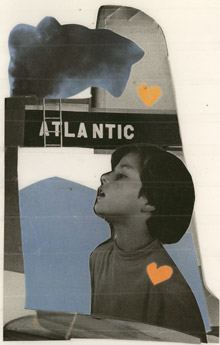